Jason Hicklin ~ Printmaker of the Year 2017 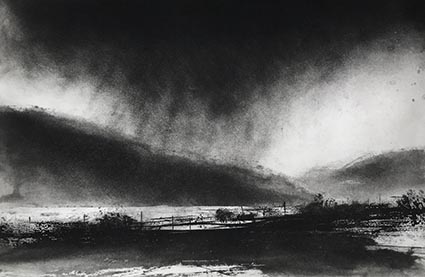 Printmaker of the Year ~ Graduating from St. Martin’s in 1988 and then from The Central School of Art in 1991, Jason was elected a member of The Royal Society of Painters Printmakers, (RE). Jason is currently a lecturer of Printmaking at City and Guilds Art School in London and has his own studio in Shropshire. Jason’s work captures the feel of the weather and light, and it’s effect on the landscape. All Jason’s work is begun outdoors. Carrying the minimum of equipment, he will walk and climb the desired area for days and sometimes nights, often in extreme weather. He describes working outdoors in these tense and exciting conditions as a tremendously connecting experience – feeling a part of the land itself.